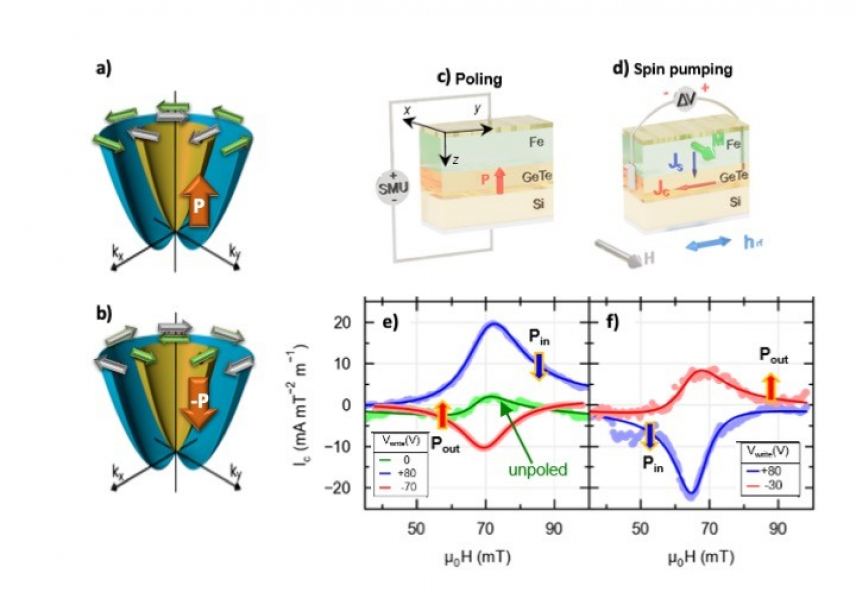 Figure: a)-b) Basic concept of FERSC: in the presence of a Rashba effect (see the characteristic Rashba-like band structure), the spin texture (represented by green and gray arrows) switches (from a) to b)) as the polarization (see orange arrow) changes sign. c)-f) Spin-pumping (SP) measurements and setup for the study of ferroelectric switching of SCC in GeTe. c) electrical circuit for ferroelectric switching monitored by resistance changes. d) sketch of the contacts used to measure lateral voltage proportional to charge current production in the same experiment. Negative (positive) voltage pulses were applied to stabilize outward Pout (inward Pin) polarization. Normalized current production (e,f) versus magnetic field for the slab oriented along ZA (e) and ZU (f), for different ferroelectric polarizations. The blue (red) curves correspond to Pin (Pout). The green curve in e) refers to the pristine (unpoled) states. Adapted from the original publication.

An international team of researchers coordinated by Christian Rinaldi from Politecnico di Milano has unveiled the potential of germanium telluride (GeTe) for ultralow-power spin-based electronics. These findings were reported in the Nature Electronics issue of October 2021 (click here for a view-only full-text access).

GeTe is the prototype of the class of materials called ferroelectric Rashba semiconductors (FERSC), originally discovered by the group of Silvia Picozzi at CNR-SPIN (including Domenico Di Sante and Paolo Barone) and one of the technological pillars investigated in the PRIN 2017 project “TWEET” she coordinates.

Rashba ferroelectric semiconductors have a Rashba-like spin-splitting of some electronic bands determined by the broken inversion symmetry connected to the ferroelectric displacement. Thus, there is a one-to-one relationship between the orientation of the ferroelectric polarization and their Rashba spin texture, allowing to envisage the electric control of spins in the semiconductor [see Fig. a) and b)].

In this work, the authors show that the ferroelectric polarization of epitaxial thin films of germanium telluride can be switched by electrical gating and used to control spin-to-charge conversion (SCC) through inverse spin Hall effect, in a non-volatile fashion [see Fig. c)-f)]. A prototypical architecture for beyond-CMOS in-memory-computing devices is thus proposed, exploiting the favourable scaling laws of GeTe and the compatibility of the compound with silicon technology.

The activity has been supported by Ministero dell’Università e della Ricerca (MUR) within the PRIN programme, project no. 2017YCTB59 (TWEET, Towards ferroelectricity in two dimensions), coordinated by CNR-SPIN.