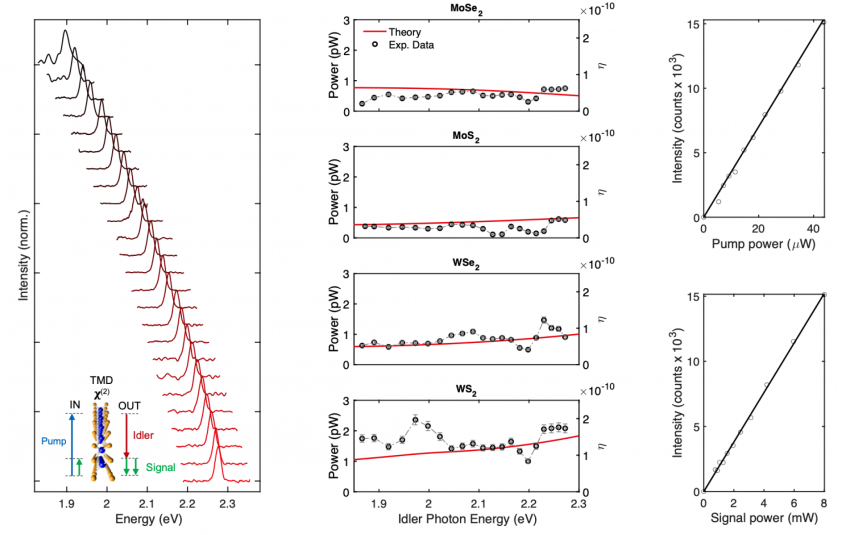 Optical parametric amplification is a second-order nonlinear process whereby an optical signal is amplified by a pump via the generation of an idler field. This mechanism is inherently related to spontaneous parametric down-conversion, which currently constitutes the building block for entangled photon pair generation, a process that is exploited in modern quantum technologies.

An International collaboration between CNR-SPIN (Alessandro Ciattoni), Politecnico di Milano, IFN-CNR, University of L’Aquila and Columbia University has lead to the demonstration of a single-pass optical parametric amplification at the ultimate atomic thickness limits. The outcomes of the theoretical/experimental investigation have been published on Nature Photonics.

Using semiconducting transition metal dichalcogenides, amplification over propagation through a single atomic layer has be attained. Such a second-order nonlinear interaction at the two-dimensional limit bypasses phase-matching requirements and achieves ultrabroad amplification bandwidths. In agreement with first-principle calculations, the amplification process has been shown to be independent of the in-plane polarization of signal and pump fields. By the use of AA-stacked multilayers, a clear pathway towards the scaling of conversion efficiency has been proven. The results pave the way for the development of atom-sized tunable sources of radiation with potential applications in nanophotonics and quantum information technology.