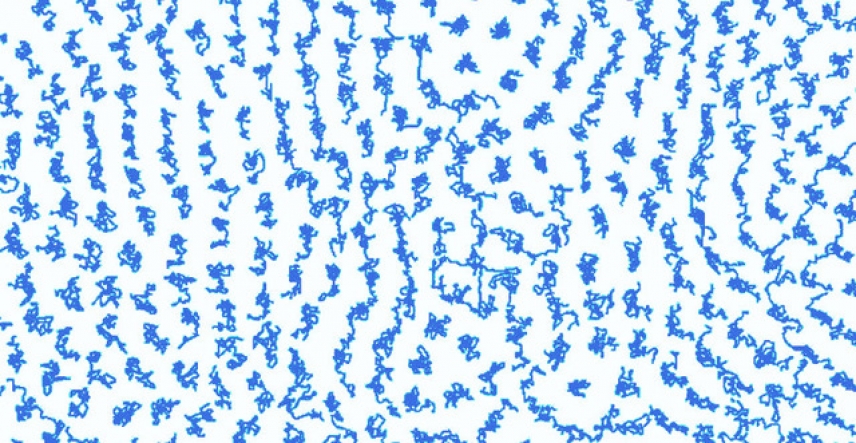 Atomic trajectories in a 2D liquid generated by computer simulations. The correlated elongation of the trajectories is a visual signature of the newly-discovered collective motions, showing that 2D and 3D liquids are fundamentally different. M. Pica Ciamarra

A 50-year-old puzzle in statistical mechanics has been solved by an international team of physicists, who have proved that two-dimensional (2D) liquids have fundamentally different dynamical properties to three-dimensional (3D) liquids.

The new study was led by Massimo Pica Ciamarra, CNR-SPIN Researcher and Associate Professor of Nanyang Technological University (NTU Singapore), and was published in November 2019 in the Proceedings of the National Academy of Sciences of the USA. The team included theoretical and experimental physicists from NTU, the Jawaharlal Nehru Centre for Advanced Scientific Research in India, the University of Science and Technology of China, and the University of California at Los Angeles in the USA.

Physicists have long been aware that 2D and 3D matter can have dramatically different properties. In the 1960s, David Mermin and Herbert Wagner derived a fundamental theorem stating that 3D crystals can grow to arbitrarily large sizes but 2D ones cannot. The Mermin-Wagner theorem, as it is known, stems from the effects of thermal fluctuations — microscopic vibrations that all atoms undergo at temperatures above absolute zero. In 2D, these vibrations cause solids to lose their regularity over long distances, regardless of how strongly attached the atoms are to each other. The Mermin-Wagner theorem, however, applies only to solids, and physicists did not know whether any similar differences exist between 2D and 3D liquids. The nature of thermal fluctuations is very different in liquids, because the atoms flow rather than staying near fixed positions.

2D liquids are not merely hypothetical constructs, but arise in many real-world circumstances, such as thin films of fluids trapped on solid surfaces. They are routinely studied both experimentally and using computer simulations, often with the intention of serving as simplified representations of 3D liquids. Typically, such studies aim to rationalise familiar macroscopic fluid properties, such as the viscosity, in terms of the underlying microscopic motions.

Using a mix of pen-and-paper calculations and numerical simulations, the team predicted that atoms in 2D liquids can travel for long distances before effectively ‘forgetting’ their initial positions. They showed that this effect gives rise to a subtle collective motion of the atoms, of a sort that had previously only been thought to occur in solids.

To confirm their theoretical findings, the researchers performed experiments that tracked the motions of colloidal particles under a microscope. In ordinary 3D liquids, such particles execute a type of random motion known as Brownian motion. But in 2D liquids, the team found that the Brownian motion is overlaid on large-scale collective motions, as predicted by the theory.

These findings help to explain differences between the dynamical properties of 2D and 3D liquids which had been puzzling scientists for years, and the will likely change the way physicists study the dynamics of liquids. Currently, researchers routinely use 2D experiments and simulations to represent 3D liquids, because 2D is easier to deal with. This assumption must now be re-evaluated in the light of our discovery, which shows that 2D liquids and 3D liquids are not just variants of each other, but fundamentally different types of matter.

Last modified on Monday, 20 January 2020 23:56
Read 334 times
Published in News
More in this category: « The Nernst effect in Corbino geometry SUPERGALAX: Quantum technologies for the search of galactic dark matter axions »
back to top