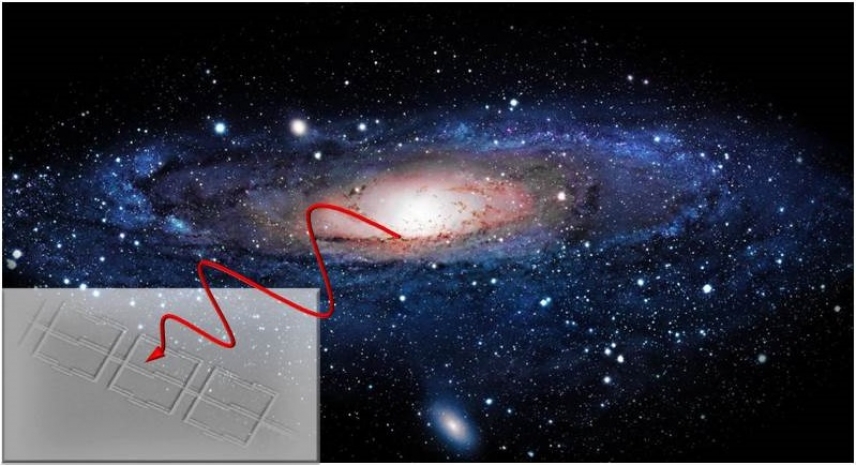 A superconducting qubit, the core element of recent quantum computers, could be considered as the lead technology that makes it possible to unravel the mystery of dark matter in our Universe.

Thanks to the 2.5 M€ European funding allocated to the SUPERGALAX project in the framework of the H2020-FETOPEN -2018-2020 call, a consortium of European Universities and Research Centres including two institutes of the CNR of Italy  (SPIN and NANO), Ruhr University Bochum (Germany), Loughborough University (United Kingdom), Istituto Nazionale di Ricerca Metrologica (Italy), Karlsruher Institut fuer Technologie (Germany), Leibniz-Institut fuer Photonische Technologien E.V. (Germany), Istituto Nazionale di Fisica Nucleare (Italy), will develop a device sensitive enough to be able to detect microwave single photons expected from the presence of axions in the galaxy. Dr. Mikhail Lisitskiy from the SPIN-CNR is a Coordinator of this Project.

In the SUPERGALAX project a  novel approach to detect extremely low energy microwave signal (~1 GHz), based on the general concept of a passive quantum detection is proposed. For such highly sensitive detector (quantum antenna) the key novel concept intended to be used  is the coherent quantum network composed of a large amount of strongly interacting superconducting qubits embedded in a low dissipative superconducting resonator. The dynamics of coherent quantum networks based on two types of superconducting qubits: transmons and flux qubits, will be proposed and explored.  A spatially distributed network of superconducting qubits interacting off-resonance with the incoming radiation, shows the collective alternative current Stark effect that can be measured even  in the limit of single photon counting. The interaction of the electromagnetic signal with the collective quantum states occurring in the network of superconducting qubits has the fundamental characteristic of a quantum non-demolition measurement, whereby the quantum states of the signal and the collective states of qubits become gradually entangled. In particular, by employment of the network of large number of qubits (N) and utilization of a collective mode established in the network, it is possible to exceed the standard quantum limit and reach the so-called Heisenberg limit of sensitivity which is proportional to 1/N instead of ~1/√N in case of N non directly interacting qubits. Assessment of the progress will be done by testing arrays with increasing number of superconducting qubits using complementary experiments with different single photon sources. The feasibility of the superconducting network detector for galactic dark matter axions search will be finally tested by axion conversion experiment in a magnetic field.

The development of such a device is of great interest for Quantum Computing and Metrology too, and it would open up a range of interesting applications not only in fundamental dark matter physics , but also in various high technology fields, like generation, quantum transmission and manipulation of single microwave photons.

Last modified on Wednesday, 15 January 2020 12:58
Read 957 times
Published in News
More in this category: « Long-wavelength fluctuations and anomalous dynamics in 2-dimensional liquids Special Issue "Physics and Applications of Epsilon-Near-Zero Materials" »
back to top