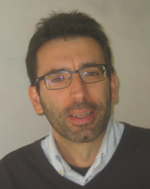 SHORT BIO: Luca Pellegrino is currently permanent research scientist at CNR-SPIN unit of Genoa. He received his degree in physics in 2000 and obtained his PhD in physics in 2004 from the University of Genoa in the group of Prof. Antonio Sergio Siri, discussing a thesis on “Towards nanostructured field effect devices on perovskites: side gate transistors on SrTiO3 by AFM anodization”. In 2000, he joined Prof. Jean-Marc Triscone laboratory at the “Département de Physique de la Matière Condensée”, Geneva (Switzerland) where he worked on novel Surface Acoustic Waves devices (SAW) made by AFM local polarization of ferroelectric oxide thin films (PZT). In 2005, he joined Prof. Tomoji Kawai laboratory at the “Institute of Scientific and Industrial Research”, Osaka University, Osaka (Japan), where he collaborated with Prof. Hidekazu Tanaka and Prof. Takuya Matsumoto on the fabrication and characterization of planar nanodevices realized on (Fe,Mn)3O4 thin films. Since 2004 he collaborated with the University of Genova and the Artificial and Innovative Materials Laboratory of the National Institute for the Physics of Matter.

•  2008 ESF-THIOX award “for his outstanding work on nanometric patterning techniques of epitaxial oxides and on the realization of innovative nanodevices that allow the investigation of conduction mechanisms in complex oxides at the nanometer scale".

• Bilateral project 2018-2019 between the National Research Council (CNR) and the Japan Society for the Promotion of Science (JSPS) in the framework of the Bilateral agreements of Scientific and Technological Cooperation. Project leaders: Luca Pellegrino, Teruo Kanki. Project entitled “Domain manipulation in VO2 Freestanding Nanomechanical Structures”.

• Italian coordinator of the “Joint Research Project of Particular Relevance“ within the executive programme of cooperation in the field of science and technology between Japan and Italy for the years 2017-2019. Project title: "Solid State Actuators for Micro/Nanorobotics” (Japanese coordinator Prof. T. Kanki, Osaka University (JP)). Project web-site: www.vo2actuators.spin.cnr.it

• Responsible for the “2013 joint research projects within the executive programme of cooperation in the field of science and technology between Japan and Italy for the years 2013-2015”. Funding agency: Ministry of Foreign Affairs.    (Partner  Prof.  T.  Kanki-  Prof.  H.  Tanaka,  Osaka  University  (JP)). Title: “Micromechanical devices based on Vanadium Dioxide Films“

•  Winner of the INFM call for Young Researchers 2008. Responsible for the project: “Smart Micro and Nanoelectromechanical Systems based on Functional Oxides (SMEMO)”

• Member of the Scientific Technical Committee of START 4.0 (https://www.start4-0.it/)

• Member of the "Outreach and Dissemination" working group of CNR-SPIN.

• Organizer of the “Workshop on Microactuators” on October 8th 2018, Genova (IT).