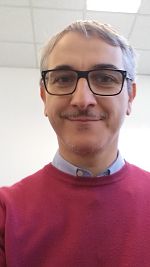 2004   PHD in Innovative technologies for materials, sensors and imaging, Dep. of Industrial Engineering;

Since Nov 2009: Staff Researcher at the Institute for Superconductors, oxides and other innovative materials and devices (SPIN) of the National Council of Research (CNR),  Unity (UoS) of Naples;

Oct 2000 - Jan 2001 – Department of Electronic and Telecommunication Engineering, University “Federico II” of Naples, research activity in “Evaluation of the performances of electromagnetic sensors”;

Nov 2005 – Dec 2005 – CNR - INFM (National Institute for condensed matter physics), post-doc research activity in “Characterization of the dielectric properties of insulating films for the fabrication of filed-effect devices based on organic and hybrid semiconductors”;

Feb 2006 – March 2006 – Department of Physics of University of “Federico II” Naples, post-doc research activity in “Characterization of the dielectric properties of insulating films for the fabrication of filed effect devices based on organic and hybrid semiconductors” ;

Mar 2005 - Apr 2005 – Stage at ST Microelectronics (Naples) with a project on “Fabricaton and electrical testing for Organic Light Emitting Diode”;

May 2011 – Scientific visit at the Department of Condensed Matter Physics, University of Geneva  (Switzerland), working in the group Porf. A. Morpurgo on “Ionic liquid techniques applied to Organic Transistors”;

Since the beginning, the activity research of Mario Barra has been devoted to the study of the electromagnetic properties of innovative materials and to the development of related devices suitable to be utilized in different application fields. During the years 2000-2004, the activities were mainly focused on the design, fabrication and experimental testing of planar microwave devices based on superconducting films. The development of miniaturized superconducting planar filters for mobile communications was the main subject of study. Starting from 2005, the scientific work has been basically committed to the investigation of the charge transport phenomena in organic functional materials and on the fabrication and electrical characterization of electronic devices, such as Light Emitting Diodes, solar cells, sensors, and transistors based on these materials. For the characterization of materials and devices, a wide series of techniques operating both in DC and AC regimes, up to the microwave range, has been applied. At present, the main scientific interests are:

Co-supervisor of about 25 master thesis (I and II level) in Electronic, Biomedical and Chemical Engineering.