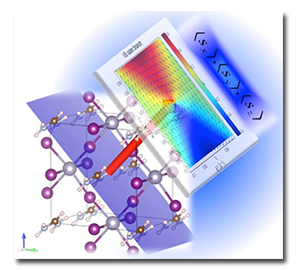 The project aims at understanding the fundamental microscopic mechanisms and the emergent physical phenomena of complex materials, which are characterized by a strong entanglement of spin-orbital-charge-lattice (SOCL) degrees of freedom, mainly driven by electron-electron correlations and spin-orbit interaction, and include the combination with quantum topology. Targeted material platforms, in bulk, thin-film and superlattice form, are based on transition metal oxides (TMO) at large, but also other transition-metal based systems where electron correlations and spin-orbit coupling can play a relevant role.
A long-term perspective is finding the best candidates among SOCL and/or topological materials (mainly in the realm of TMO) for achieving new paradigms in emergent technologies, for instance beyond the conventional electronics based on the electron charge. Within this framework, the project focuses on investigating materials with a relevant impact towards novel concepts of electronics  (e.g. orbitronics, magnonics, spin-orbitronics, and topotronics) which exploit the orbital degree of freedom, collective spin modes, spin-orbit coupling, spin-momentum locking or topological edge states, thus opening exciting perspectives in dissipationaless spin currents, spin-to-charge conversion, high sensitivity to emergent electric and magnetic fields, all aiming  at outperforming current approaches in carrying logic operations, computation, information storage, etc.

The conventional view of complex electronic matter arises from the idea that strong Coulomb interaction is a fundamental prerequisite to achieve new quantum phases. The paradigmatic example is the metal-insulator Mott transition and 3d TMO are key materials in this framework. Recent research efforts are however increasingly indicating that the combination of strong spin-orbit coupling and electron-electron interaction, joint with inversion symmetry breaking, represents a rich source of new phenomena, effects and phases of matter. Furthermore, the concept of band and Mott insulators as well as superconductors and conventional metals have been revisited in view of their (possibly non-trivial) “topological” behaviour. Along this direction, the field is undergoing a sequence of exciting discoveries, new theoretical frames based on Berry phase physics are becoming more and more popular and the concepts of order and disorder have been substantially expanded and broadened to accommodate new and exotic solid and liquid quantum phases. For instance, electrons propagating in a frustrated spin background, by exhibiting fractional quantum Hall effects, as well as novel magnetoelectric effects or exotic magnetotransport behaviour in iridates, have opened the way for a strong connection of topological phenomena with that of correlated electrons.

The main objectives of the project are:

All the required expertise are covered by the project team, involving  researchers with competences in: